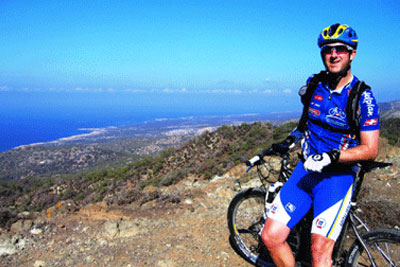 Cyprus is ideal for cycling and it’s not just because of the guaranteed sunshine. Granted the excellent weather conditions prevailing on the island mean cycling can be enjoyed almost throughout the year. And, unlike other European or Mediterranean countries, strong headwinds are rare.
It is however the island’s compactness that is its main attraction, offering rapid changes of terrain and scenery on even the shortest cycling routes. Within the space of 10 km you can go from steep to flat, enabling you to experience all surfaces within a short period of time and making the island into one huge cycling arena.
Whether a professional, a fanatic or a leisure cyclist you can take advantage of the bike centers which are available within the Polis area, offering rental services, route information, guide assistance and support. They can organize your journey to take you through a varied landscape combining mountain views, rugged coastlines, olive groves and fascinating ancient ruins. Alternatively you can explore Cyprus at your own pace; there are maps available and also GPSs with pre-programmed routes which you can be supplied with your hired bike.
Being so close to Akamas national park, our location is ideal for both mountain and road cycling. You can set off from the Tavros without the need of driving to a cycling route.
Popular routes include the following:

Alternatively you can drive to a location and have the opportunity to explore it or set off from the Tavros and be picked up at the end of the route.
Routes include the following: 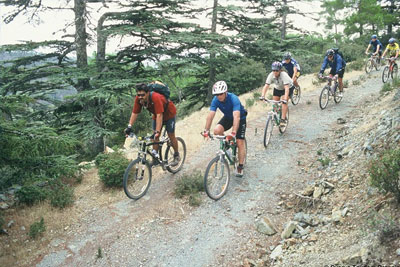 The route goes through Neo Chorio and then heads west. The road becomes a dirt track just outside the village. It then passes Smigies picnic site, which is the last stop for water. From Smigies the route climbs rather steeply and turns right, heading southwest along the slopes of a hill offering alternating views of the east and west sides of the peninsula. Three kilometres from Smigies, a turning to the right leads to ruins known as Pyrgos tis Rigainas. Alternatively, continuing straight for another 2 kilometres leads on to the road to Lara, Fontana Amorosa and the Baths of Aphrodite. Further along this road is Akamas lighthouse, the perfect place to enjoy a magnificent sunset, provided you can cycle back safely before it gets dark!
Alternative route: You can return to Neo Chorio from the lighthouse by going along the Fontana Amorosa road to the Baths of Aphrodite. 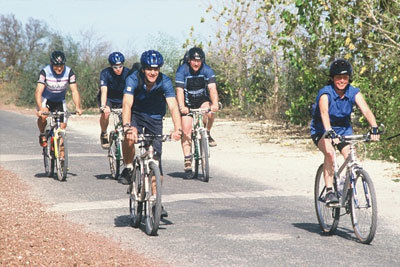 From Neo Chorio, this 23 kilometers route heads southwest along the Polis - Pafos (Paphos) road until it reaches a turning to the right towards Androlikou. Climbing steadily at Xeropotamos, it goes through the villages of Androlikou and Fasli. Continuing in the same direction, it reaches another turning to the right at a dirt road. This leads downhill to the west of the Akamas mountain ridge as far as the end of the peninsula. After about 4 kilometers of dirt road there is another turning to the right, which leads to the Smigies picnic site and then to Neo Chorio. 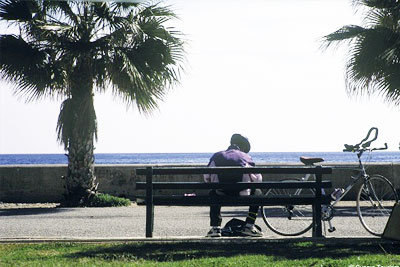 From Neo Chorio this route heads towards Polis, Steni, Peristerona and Lysos. Stone built and well known for their efforts to maintain the beauty and traditions of Cyprus. The surrounding countryside is also very picturesque and at approximately 500 meters above sea level the hills are covered with vines, olive trees, wild flowers, herbs and fruit trees while most of the locations offer views to the sea, the Akamas Peninsula and the Evretou dam. It is highly recommended to take the old road from Peristerona to Lysos village and then down to Pelathousa on to Polis and Neo Chorio. 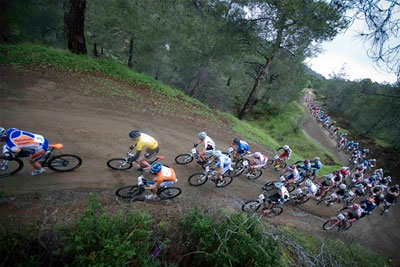 The 57 kilometers route begins in Neo Chorio, travels to Polis and then heads along the coast in a northeasterly direction to Pachyammos. It then does a little detour, climbing up into the mountains in a southerly direction in order to by-pass the Turkish enclave of Kokkines, after which it goes downhill to rejoin the coastal road to Pyrgos. 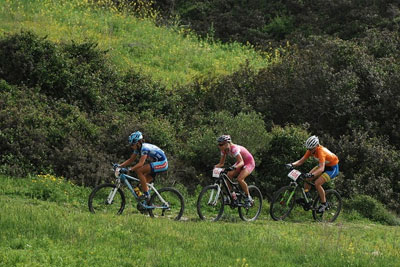 Going through one of the most beautiful regions of the island, cycling through winding narrow dirt tracts amongst the pines, if you are lucky you may get a glimpse of a mouflon.
Again this route begins in Neo Chorio, travels to Polis then takes you onto F723 road to Lysos via Steni and Peristerona. Fantastic views as you cycle at 600 meters above sea level and mile after mile of pine forest.
6km after the Lysos the road starts to climb steeply and winds onwards and upwards, the air getting cooler as each meter passes. Once the road levels off, it continuous to traverse the mountain side until you come down into the Stavros Forest Station. 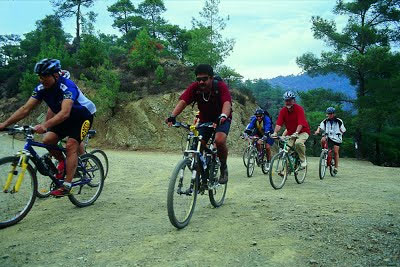 Spectacular views as you are 600 meters above sea level. From the Gorge follow road signs for Droushia. Head towards Pittokopos and at the wooden pagoda take a left for the E4 (European trail) dirt track. Simply follow this track that runs along the spine of the Akamas. Follow signs for Neo Chorio past the Smiyies picking site.

Important  Links
Testimonials
Had a lovely weekend, the Tavros is run by a lovely family, very friendly and accommodating, the place was lovely and clean with nice gardens, a perfect place to explore the area, two tavernas in the village, we enjoyed the stonehouse better.
Stayed July 2014, traveled as a couple
- perfect_match1
Designed & Programmed by Nile Web Design and Graphics
Copyright © 2015 - Tavros Hotel Apartments